Wrap Up of October

We had a busy October.

My daughter Kayli and her fiancé Chad got married.

Here is a picture of their beautiful family.

These se two came home from Arkansas to attend the wedding, it was great to have them home again.

We had a small reception with a little karaoke action.

That’s my son Nic, my aunt Marilyn, and me singing for the crowd.

It was a great night with lots of family and good friends!

Then we had Halloween, of course.

Here is a shot of Hudson with his ghostly gourd.

Kinsley, Kennedy, and Michael are showing off their Jack-O-Lanterns.

Hope your October was great, too!

This Easter was a great time!

There was lots of great food….. 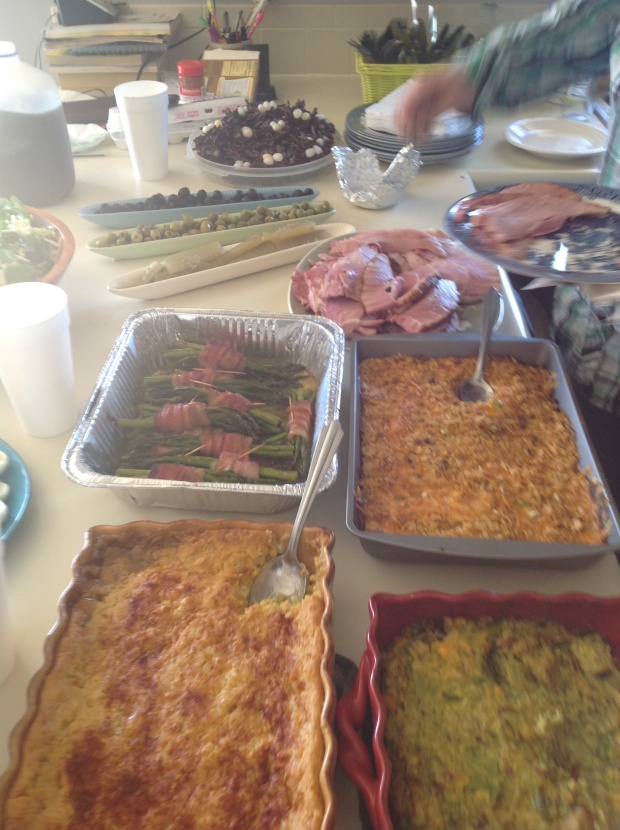 Mom  always does the Easter feast and it was delicious this year.

The asparagus bundles were my favorite.

I like to try to make something fun for Easter every year so I made these nests with eggs.

I love getting together with family.

Especially when a good game of kickball is involved. 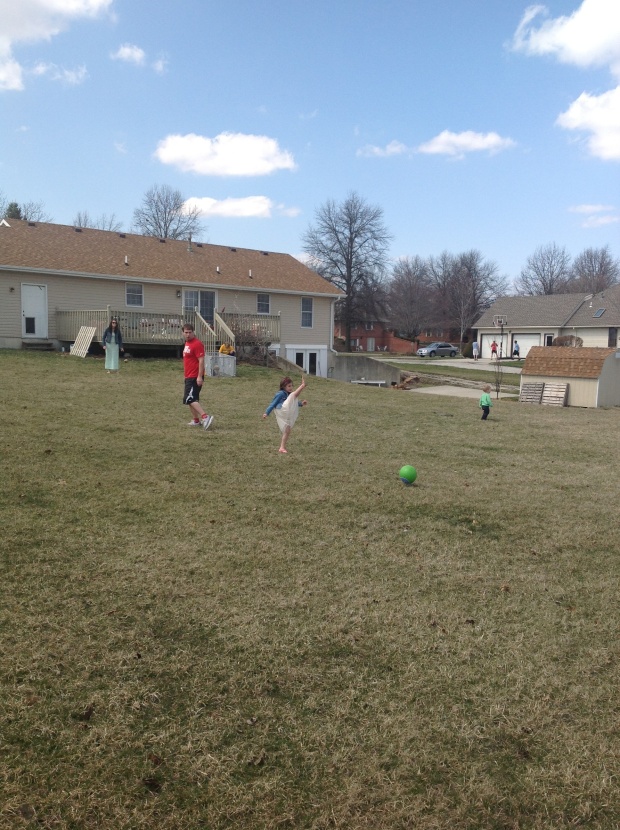 My brother, Bill was really moving out in that one!!!

According to my family, you are never too young or too old for kickball.

I hope your Easter fun was as memorable as mine!

THANK YOU JESUS FOR YOUR SACRIFICE FOR US SINNERS!!!

Look at what showed up at my door this morning! 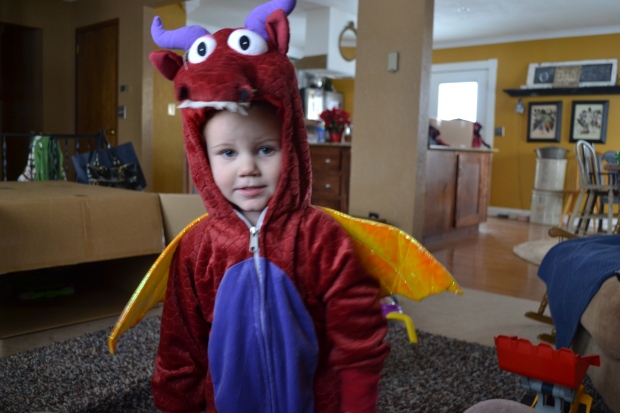 This is my 2-year-old grandson, Michael Eugene.

He was growling, too.

Oh what fun we will have today!!

We  had 6 birthdays in July to celebrate.

My birthday was the 9th and my daughter, Kayli made this for my birthday dinner.

These cupcake sized desserts were so heavenly.

One of the guys that I work with brought these in for my birthday at work.

His wife saw that it was my birthday on Facebook and made them for us.

For my son, Nic’s Birthday on the 18th, I made a chicken fried steak dinner, with mashed potatoes and gravy.

One of his favorite meals.

Here is the Pioneer Woman’s Recipe that I used:

Begin with an assembly line of dishes for the meat: milk mixed with egg in one; flour mixed with spices in one; meat in one; then have one clean plate at the end to receive the breaded meat.

Work one piece of meat at a time. Season both sides with salt and pepper, then dip in the milk/egg mixture. Next, place the meat on the plate of seasoned flour. Turn to coat thoroughly. Place the meat back into the milk/egg mixture, turning to coat. Place back in the flour and turn to coat.
(So: wet mixture/dry mixture/wet mixture/dry mixture.) Place breaded meat on the clean plate, then repeat with remaining meat.

Heat oil in a large skillet over medium heat. Drop in a few sprinkles of flour to make sure it’s sufficiently hot. Cook meat, three pieces at a time, until edges start to look golden brown; around 2 to 2 1/2 minutes each side.

Remove to a paper towel-lined plate and keep warm. Repeat until all meat is cooked.

After all meat is fried, pour off the grease into a heatproof bowl. Without cleaning the pan, return it to the stove over medium-low heat. Add 1/4 cup grease back to the pan. Allow grease to heat up.

Sprinkle 1/3 cup flour evenly over the grease. Using a whisk, mix flour with grease, creating a golden-brown paste. Keep cooking until it reaches a deep golden brown color. If paste seems more oily than pasty, sprinkle in another tablespoon of flour and whisk.

Whisking constantly, pour in milk. Cook to thicken the gravy. Be prepared to add more milk if it becomes overly thick. Add salt and pepper and cook for 5 to 10 minutes, until gravy is smooth and thick. Be sure to taste to make sure gravy is sufficiently seasoned.

Serve meat next to a big side of mashed potatoes. Pour gravy over the whole shebang!

Don’t they look festive in their Mexican hats?

Hudson was more interested in the singing and clapping that the waiters were doing. 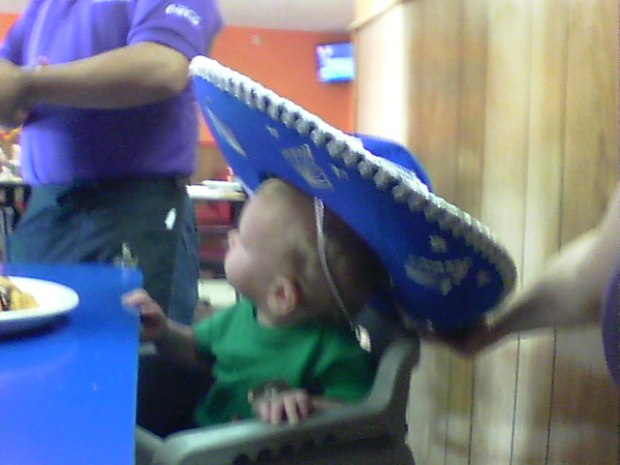 Grandpa and his birthday grandkids. 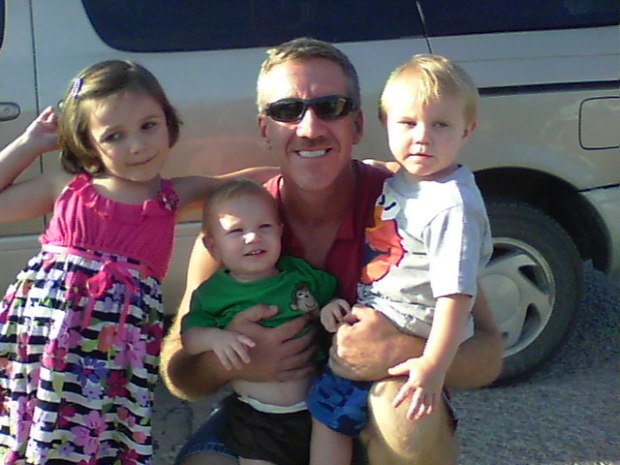 We have been very busy to say the least.

This weekend was Jesse James Days in my home town.

My grandkids were in the baby show.

He was the only one in it! 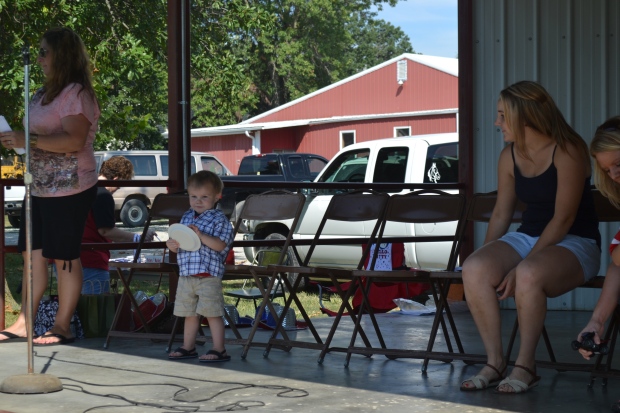 Isn’t he just the cutest thing you have ever seen???

He chased me down after I took his picture on the stage and said,  ” More cheese, more cheese!”

Wanting me to take his picture again.

Kennedy’s turn to take the stage.

Michael got the first place medal.

Kennedy ended up with second place. 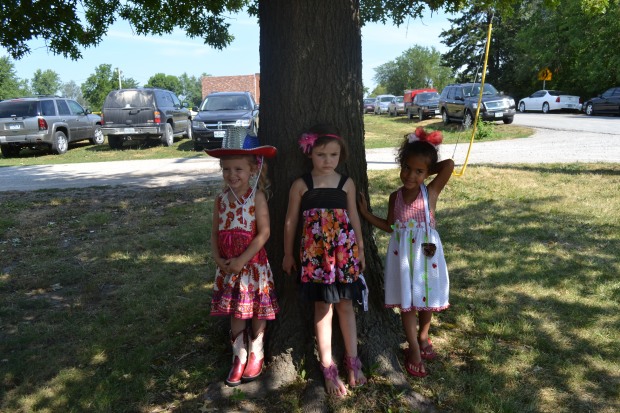 This is a picture of my cousins, Mitch and Bobby playing in the horseshoe tournament.

My cousin, Terry, Autumn,  and baby Autery just hanging out and having a good time.

It’s always fun to be in your hometown.